Last week I visited Kona, Hawaii for a retreat. The retreat was held in an oceanfront home in Kealakekua Bay across from the Captain Cook monument. Instead of describing my amazing visit, I feel compelled to celebrate listening to my “little voice” inside my heart.

When I was making arrangements to fly to Kona, I preferred to fly on Saturday, October 14. Since I was using frequent flier miles, I was given the option of returning on Friday night or Sunday night. A Saturday flight was not available. My little voice said to fly back on Friday even though I wanted to stay another day to explore the island.

During the week as I got to know some of my housemates, I was invited to go to a volcano trip on the weekend. Several people said, “stay longer, we’ll have fun, you don’t have to go back on Friday!” It was tempting. I thought several times about changing my flight. Each time my little voice reminded me that it was better for me to fly back to Phoenix on Friday.

This morning my parents called from Illinois. Since this is a rare event, I was a little apprehensive as soon as I answered the phone. My dad says, “do you know there was an earthquake on the island you just visited?” No, I was watching Drew Brees win a football game.

The earthquake hit the island where I had stayed. The epicenter was fairly close to where I had been enjoying life next to the ocean. These pictures were taken above the area where I stayed. 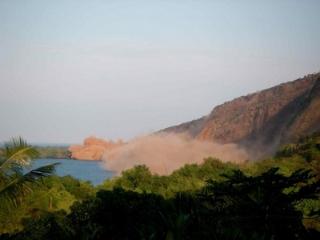 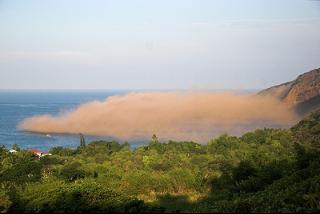 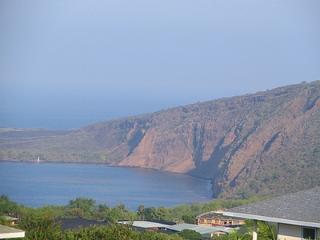 If you look closely, you can see the debris in the water after the landslide occurred. Our house was directly across the bay from the Captain Cook monument (the white speck in the picture opposite).

I don’t know yet if the debris from the landslide hit the home where I stayed. I hope everything is intact because it was truly a delight to be that close to the ocean with all the sights & sounds!

Earlier today I talked with two friends who are still on Kona and safe as of today. I haven’t heard from my other friends yet.

[10/23/2006 update: All my friends are safely home with stories of their adventures]

One thought on “Pay attention to your “little voice””